You are here: Home1 »  News2 »  With innovations from Thuringia – Radiation-hard silicon detectors... 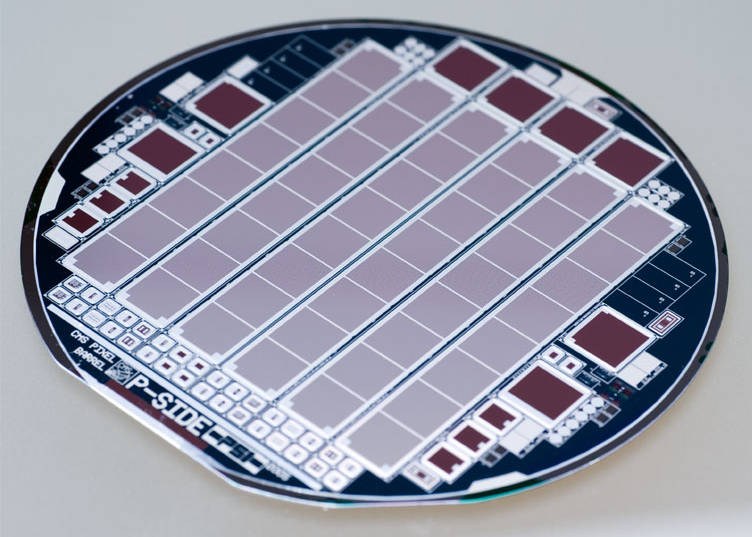 Thuringia is significantly involved in the discovery of the Higgs elementary particle. Scientists and engineers of the CiS Forschungsinstitut für Mikrosensorik und Photovoltaik GmbH are working in Erfurt on radiation-hard silicon detectors for the international nuclear research elite at CERN (Geneva). The CiS Research Institute is proud to have contributed decisively to the success with its achievements and congratulates the colleagues in Switzerland.

In years of research, highly sensitive measuring units – about as thin as a business card – with many thousands of measuring cells were developed and manufactured in-house. These measuring cells are capable of measuring the track created by the passage of high-energy particles. They are installed in the immediate vicinity of the collision point, i.e. on three cylinders at a distance of 4 to 20 cm from the point of collision.

Therefore, extreme demands are placed on these silicon detectors: Radiation-hard, flawless and robust. The 250-micrometer detectors can take 40 million photos per second. This was used to track the decay products of the particles. About 1000 detectors have been installed in the Large Hadron Collider – the world’s largest particle accelerator, about 27 km long, and measure the track of high-energy particles.

Two experiments contributed significantly to the discovery of the Higgs boson particles. For this purpose, two special measuring stations – each the size of a five-story house – were constructed, in which the CiS-PIXEL detectors were installed. The task of the ATLAS experiment is to detect the particle tracks of the resulting collision fragments. The CMS – Compact Muon Solenoid experiment is the second, large particle detector, which together with the ATLAS experiment was crucial for the discovery.

The CiS Research Institute has already received high awards from CERN for its achievements:

In 2007, the research institute in Geneva received the ATLAS Supplier Award from the European nuclear research center CERN. With this award, the CERN management honored the Erfurt researchers for the development and supply of special silicon detectors, which are required for measurements within the framework of the largest physics experiment in the world. In 2009, CiS received the CMS Gold Award of the Year for its outstanding PIXEL detectors.
Both awards are among the most coveted, European awards in industry circles.

The discovery of the Higgs particle rewards the CiS research institute’s years of painstaking effort to develop special detectors and manufacture them in small to medium series. The results will spur on the institute’s scientists. The course has been set. The next generation of these radiation-hard detectors will be only 200 micrometers thick. The goal is to get even closer to the collision point. The radiation detectors from the CiS Research Institute are a small milestone in this direction.

CERN is the European Organization for Nuclear Research, based in Geneva. The name is derived from the French Conseil Européen pour la Recherche Nucléaire. Founded in 1954, CERN was one of the first European joint ventures. Today, there are 20 member states and eight organizations and countries with observer status. CERN employs a total of 3,000 permanent scientists, engineers, administrative staff. In addition, 6,500 visiting scientists from 500 universities in more than 80 nations conduct research in the laboratories of the European organization. That is why it is called the largest particle physics laboratory in the world.
Scientists want to find out what matter is made of and what forces hold our world together.