20 years of success with silicon 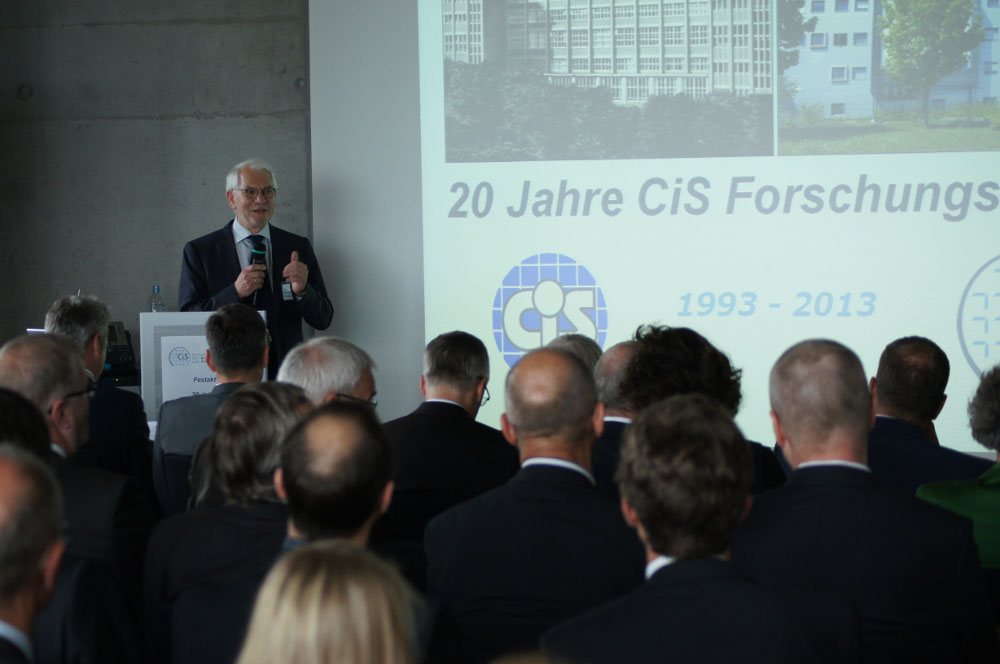 Dr. Hans-Joachim Freitag at the opening of the ceremony

CiS Forschungsinstitut für Mikrosensorik und Photovoltaik GmbH is celebrating its 20th anniversary these days. Originating in 1993 from the Erfurt microelectronics department, the institute has today developed into a renowned, business-oriented research institution.

The founders’ vision was to build bridges between basic research at universities and commercial applications in industry.

As a private-law, non-profit research institution, CiS sees itself as an innovation accelerator.

“We aim our work at applied industrial research. The focus is not on theories, but on laboratory samples, prototypes and the introduction of series production,” says Managing Director Dr. Hans-Joachim Freitag (Fig. 1). Accelerated innovation transfer also means producing the developed microcomponents on behalf of industry, sometimes in multi-shift operations.
“Our range of services from development to production is a successful model in the German research landscape. We are thus living up to our economic policy mandate,” continues Hans-Joachim Freitag.

Great technological understanding, i.e. know-how, and expensive special manufacturing equipment are necessary for the production of the high-tech components.
“In order to realize our customers’ ideas and thus enable innovations, immense investments in machines and “brains” are necessary prerequisites,” emphasizes the head of the institute.

The Erfurt scientists and engineers provide more than 40% of the services for Thuringian SMEs. These thus strengthen their competitiveness on global markets.

However, not only innovative, small and medium-sized enterprises are among the long-standing customers of CiS, but also internationally operating companies. Long-term, strategic partnerships are a key to success here.
Some examples: In the 90s position sensors, together with Carl Zeiss Jena, Numerik Jena and the company Optolab were developed and led to success worldwide.
Silicon sensors of CiS have conquered a top position in pressure measurement and precision weighing technology.

The CiS Research Institute is proud of the hard-earned trust that world market leaders such as Endress+Hauser or Sartorius Weighing Technology have placed in the Erfurt-based company. Thus, one is a single-source supplier (sole manufacturer) of core components for industrial pressure sensors and leveling systems.
“This is, of course, the best confirmation of the performance and innovative strength of our employees as well as the quality and reliability of our products,” Hans-Joachim Freitag sums it up. “On this anniversary day, I am especially grateful to all CiS employees.”

Of course, 20 years of CiS also means 20 years of hard scientific research work. Today, innovations are created on an interdisciplinary basis. For this reason, the Erfurt-based company is well networked with Thuringia’s universities, colleges and Fraunhofer institutes.

Together with the Fraunhofer IOF Jena, the application center for micro-optical systems was launched in 2007 to develop new products and technologies in the field of micro-optical sensor technology with and for industry.

In the BMBF program “Spitzenforschung und Innovation in den Neuen Ländern” (cutting-edge research and innovation in the new federal states), the CiS is working together with the Friedrich Schiller University of Jena and the Ilmenau University of Technology on new microsystems for medical technology, bioanalytics and laser technology.

In the leading-edge cluster “Solarvalley”, CiS is the largest Thuringian research institution.

Particularly noteworthy is the intensive and close cooperation with the Ilmenau University of Technology both in the field of micro and nanotechnologies and in the field of renewable energies, especially photovoltaics. Prof. Hannappel, as an endowed professor of the university, is also the scientific director of the solar center at CiS. This was also the basis for the recognition of the CiS as an affiliated institute of the TU Ilmenau.

The joint commitment of CiS and TÜV Thüringen to the solar industry must also be mentioned – the solartestlab was founded in a joint venture.

In 2012, the discovery of the Higgs boson attracted worldwide attention – not only in science. For more than a decade, the CiS Research Institute has been working on so-called radiation detectors in international collaborations with numerous research institutions.
For the world’s largest particle accelerator at the European Nuclear Research Center CERN near Geneva, the Erfurt-based company supplied more than 4000 silicon detectors and thus made a significant contribution to the discovery of the last elementary particle that had not yet been detected.

During yesterday’s ceremony, Prof. Rolf-Dieter Heuer, Director General of the European Organization for Nuclear Research, explained the importance of these experiments for basic research and applications (Fig. 2). It is little known that state-of-the-art diagnostic procedures in medicine are directly related to the research tasks at CERN.
Thus, the course for the future is also being set at the CiS Research Institute. For example, a new research area will soon be created in which new generations of silicon detectors can be developed and manufactured. 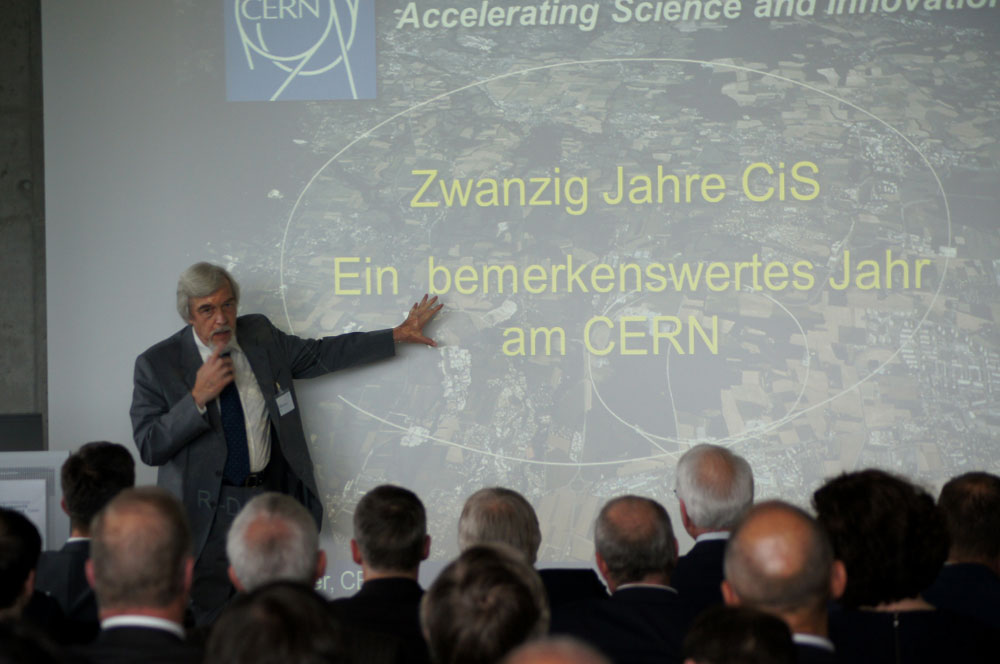 Prof. Rolf-Dieter Heuer on the fruitful cooperation between CERN and CiS