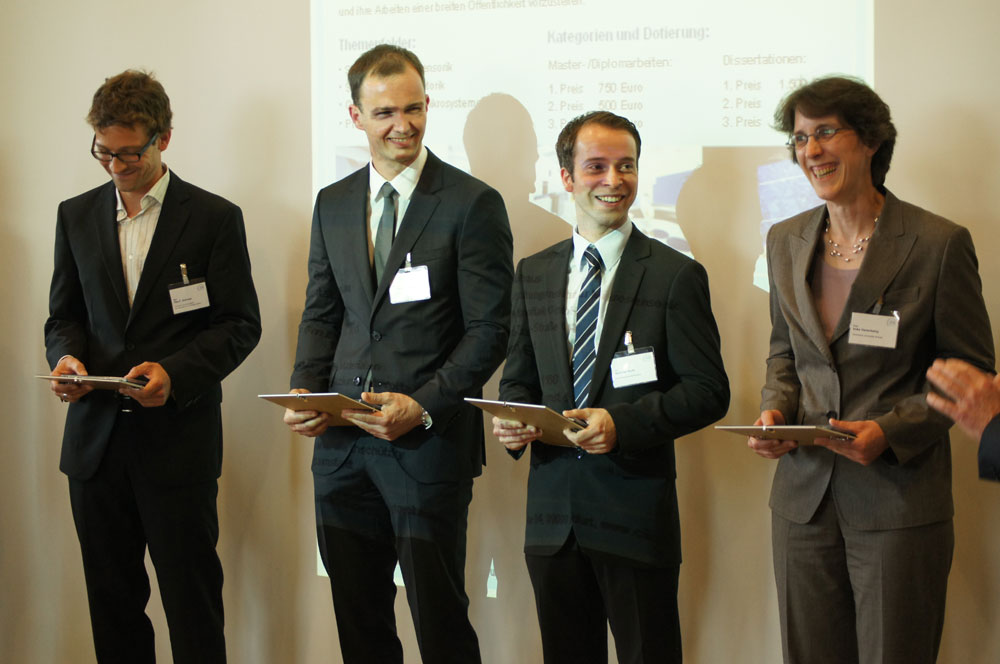 Four young researchers from Nordhausen, Dresden, Ilmenau and Berlin are pleased to receive the Silicon Science Award this year. This award recognizes outstanding work in the fields of sensor technology and photovoltaics, preferably done in conjunction with industry.

The CiS Research Institute provided a total of € 4,500 for the award.

The award ceremony took place during the ceremony on the occasion of the 20th anniversary of the CiS Research Institute for Microsensors and Photovoltaics on 03.07.2013 in Erfurt. The prize was awarded in 2 categories.

In the category diploma/master thesis the work of Mr. Matthias Muth, University of Applied Sciences Nordhausen was awarded with the 1st prize. In his thesis, Mr. Muth dealt with the production and characterization of selective emitters by means of laser doping on crystalline silicon solar cells. His solutions form a new approach in the laser processing of Si solar cells.
In the dissertation category, 3 prize winners were selected. Marco Schossig from the Technical University of Dresden convinced the jurors with his topic “Ultrathin, cantilever lithium tantalate elements for high-resolution infrared sensors” . His findings will be used in the production of pyroelectric IR sensors by the company DIAS Infrared GmbH.

Ms. Imke Haverkamp from the Ilmenau University of Technology, Faculty of Electrical Engineering and Information Technology won 2nd prize for her topic “System development and optimization of a highly sensitive digital magnetic field sensor”. This sensor efficiently supports the exploration of deep-lying mineral resources in areas far from civilization. The high sensitivity and the large dynamic range particularly distinguish this sensor. The user is the company Supracon AG from Jena.

The winner’s prize was awarded to Tim F. Schulze from the Technical University of Berlin.
In his work “Structural, electronic transport properties of amorphous/crystalline silicon heterojunctions”, Mr. Schulze dealt with the characterization of very thin a-Si:H/C-Si layers. Using model systems close to the device, he explained interactions and dependencies as a basis for cost-effective production of heterojunction solar cells at low process temperatures below 200 degrees.

Photovoltaics offer opportunities for a better life for 2 billion people off the grid.
The CiS Forschungsinstitut für Mikrosensorik und Photovoltaik GmbH wants to encourage young scientists to deal with issues in these fields and to present their work to a broad public.

20 years of success with silicon