CiS Research Institute at the World of QUANTUM in Munich

You are here: Home1 »  News2 »  CiS Research Institute at the World of QUANTUM in Munich 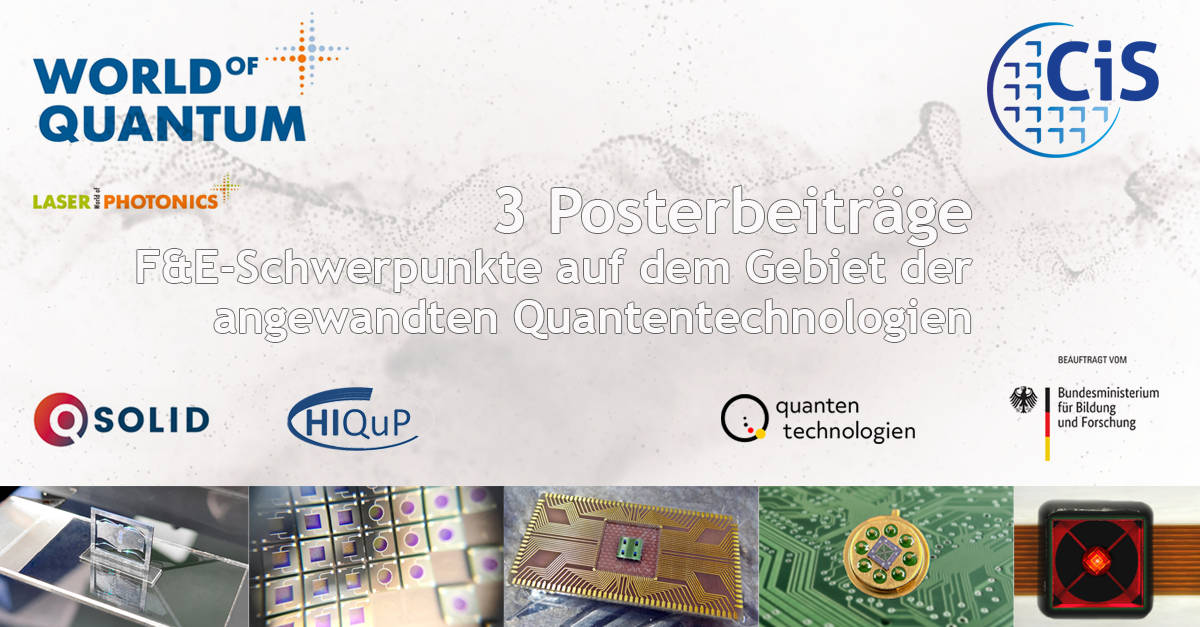 LASER World of PHOTONICS will take place in Munich from April 26 to 29. At the same time, the first World of QUANTUM will open its doors in Hall 4. Various networks, research associations and quantum clusters will present sophisticated research and development projects related to quantum technologies and photonics. The CiS Research Institute is represented with three poster contributions.

Near the Tiny Coffeehouse our research institute presents its portfolio. As a sought-after research and development partner, we have been working for decades on MEMS and MOEMS components and materials, which in principle can also be used for quantum applications. These include optical components such as single photon detectors with silicon photomultipliers, single photon avalanche diodes (SPAD) and optical fibers, as well as material developments based on silicon-ceramic composites (SiCer) or locally functionalized synthetic diamond. These can find application in hybrid optoelectronic assemblies for quantum effect-based sensors and even for quantum processors. For the realization of micro-engineered hybrid systems, the CiS Research Institute acts along the entire value chain from multi-physical parameter simulation, silicon wafer process and packaging technology to final device testing.

Prof. Thomas Ortlepp will be available as a contact person.

In the BMBF-funded project “QSolid – Quantum Computer in the Solid State”, we have been developing scalable technologies for a quantum computer together with more than twenty alliance partners since the beginning of January. There will be several generations of quantum computer demonstrators with different processor generations. In addition to the development of the actual qubits and their integration, novel electronic circuits are being developed for controlling the internal processes in the quantum processor and exchanging information with classical computers. Superconducting circuits form the basis for this. Within five years of project duration, using promising technological approaches, a competitive German quantum computer with at least 100 individually controllable qubits is to be created and scalable to 500 qubits. The consortium represents a complete value chain – starting from material design to the finished demonstrator. The CiS Research Institute for Microsensors works in subproject 3 “Scaling Technology” as well as in subproject 4 “Quantum Computer Environment”.

Within the project “HIQuP – Highly integrated and scalable interface circuits for quantum processors” innovative circuit concepts are fundamentally researched and demonstrated. Superconducting AQFP circuits are an essential functional element in the overall concept of scalable quantum computers. In the overall project, control and parallel readout of individual qubits will be demonstrated in two demonstration experiments. The goal is a measurable demonstration of the achievable scalability.

Happy Easter – Creative competition for the children of our employees