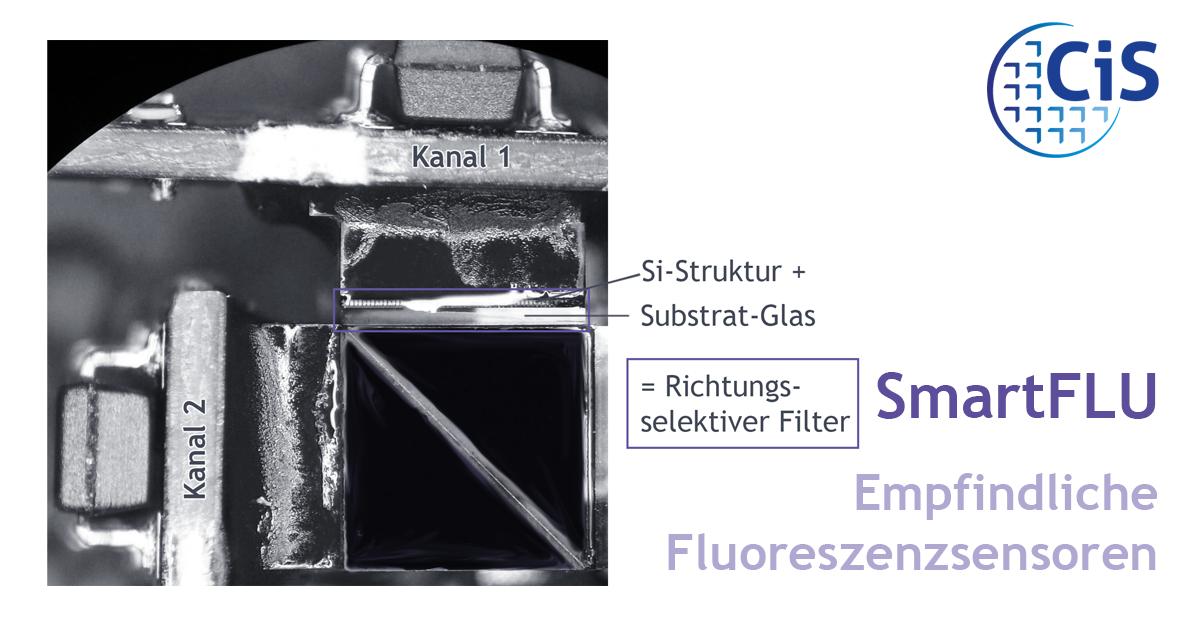 Modern fluorescence sensors should be small, high-resolution and highly sensitive, inexpensive and robust. The CiS Research Institute has met these challenges and developed a technological construction kit for a 2-channel fluorimeter. Such measuring systems are used in medical PoC diagnostics, in the monitoring of diabetes patients, but also in environmental technology for rapid on-site water analysis or in security technology for protection against plagiarism.
The core components of the fluorimeter include photodiodes with special anti-reflection layers, novel dichroic beam splitters, a powerful bandpass with a high angular acceptance and additional optically direction-selective filters.

In the only 3x3x3 mm³ small beam splitter cube made of quartz glass, a novel dichroic layer system consisting of 143 layers of SiO2, Nb2O5 and a mixed material (SixNbyOz) is located on a diagonally dividing surface, thus realizing an accepted angle of incidence of 45°.
Several band-pass filters, which can be manufactured at low cost, ensure optimized interference signal suppression and block unwanted excitation light. Special attention was paid to an improved filter performance for scattered excitation light.

The direction selective filters were manufactured by ICP etching on SOG (Silicon-on-Glass) wafers. So-called “black silicon” was produced on the vertical walls of the resulting cavities. In this way, a transmission of up to 40 % could be achieved at an optical angle of incidence of 0°. At an angle of incidence greater than 13°, the transmission is 0%. Thus, parasitic stray light behind the optical filter can be almost completely suppressed.
Microsystem technologies are the basis for the achieved high degree of miniaturization of the entire system, which is no larger than a sugar cube.

The holistic system design takes into account optical, electrical and mechanical subcomponents at the same time, so that the user not only has a compact sensor module at his disposal at the end, but also a cost-effective, high-precision, automated assembly technology can be offered.

The technological construction kit was tested on a demonstrator for measuring the concentration of glucose in aqueous solutions using a fluorescence standard.
At an excitation wavelength of 585 nm with an optical power of 160 µW and a sampling rate of 0.5 Hz a detection limit of the measured fluorescence light of approx. 50 pW was achieved. The Stokes shift for the investigations was approx. 35 nm.

The research work was funded by the Federal Ministry of Economics and Energy under Funding code 27219006.