You are here: Home1 »  News2 »  Physics team of the University of Jena and the CiS Research Institute is... 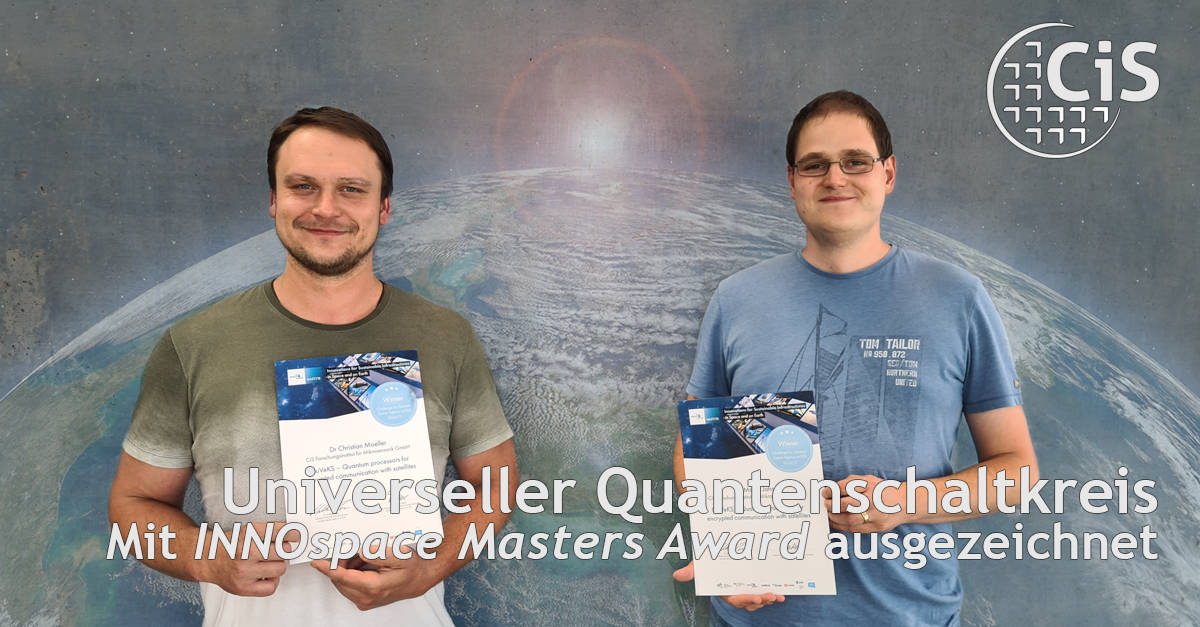 Tamper-proof communication is one of the world’s much-discussed topics. With the help of novel quantum technologies, security could be increased in the future. A research team led by Dr. Tobias Vogl from Friedrich Schiller University Jena has tackled this issue. The team submitted its project “QuVeKS – Quantum Processors for Encrypted Communication with Satellites” to this year’s competition of the “INNOspace” initiative of the German Aerospace Center (DLR) and thus won the “INNOspace Masters Award” of the “DLR Challenge”, which is endowed with 400,000 euros.

Quantum architecture on a chip

Quantum technologies offer great potential and are thus a promising vision for the future. “The quantum systems researched so far are very application-specific. They often cannot be networked and are not compatible,” notes Tobias Vogl from the Institute of Applied Physics at the University of Jena about the current state of development. The physicist has therefore been working on the application of quantum technologies since beginning his dissertation in 2016. Now the research team has made a decisive advance. Together with the CiS Forschungsinstitut für Mikrosensorik GmbH in Erfurt, the researchers from Jena are working on a universally applicable quantum circuit. Their goal is to combine the complete architecture of quantum logic – consisting of quantum light sources, waveguide technology and quantum detectors – on a compact chip.

Great future potential and a wide range of applications

The scientists were able to convince the jury of the great future potential of their project in the “DLR Challenge”. The chip can be freely programmed and can thus be used for a wide variety of applications. “Such a quantum circuit can, for example, be used in quantum cryptography and thus make the encryption of communication more secure and better,” explains Vogl. This is because quantum states can neither be copied nor read out exactly, adds his colleague Dr. Falk Eilenberger. “Such a quantum circuit could be used in the future for encrypted communication to and from satellites,” Tobias Vogl illustrates, emphasizing the increased performance that a quantum circuit brings. The chip can also be used as a physically secure random number generator, the Jena physicist names another potential area of application.

The research team will use the prize money of 400,000 euros to further develop their project. In addition to the ongoing costs for research, positions for doctoral students will also be created. The award also confirms the recent decision to establish the “Quantum Hub Thüringen” to develop the location into an important center for quantum research and industry. “The good networking within Thuringia has contributed significantly to the success of the project,” said Vogl.

About the INNOspace Masters Award

The INNOspace Masters Award is presented annually by the INNOspace initiative of the German Aerospace Center (DLR). The award recognizes innovative ideas and concepts that improve technologies, processes and applications, based on knowledge and technology transfer through the exchange of knowledge between space and other fields.
This year, topics of digital sustainability and security in space (such as secure communication services, protection against cyber attacks) as well as resource-saving approaches in space and on Earth were sought.

BAVI – Determination of the operating force of fasteners